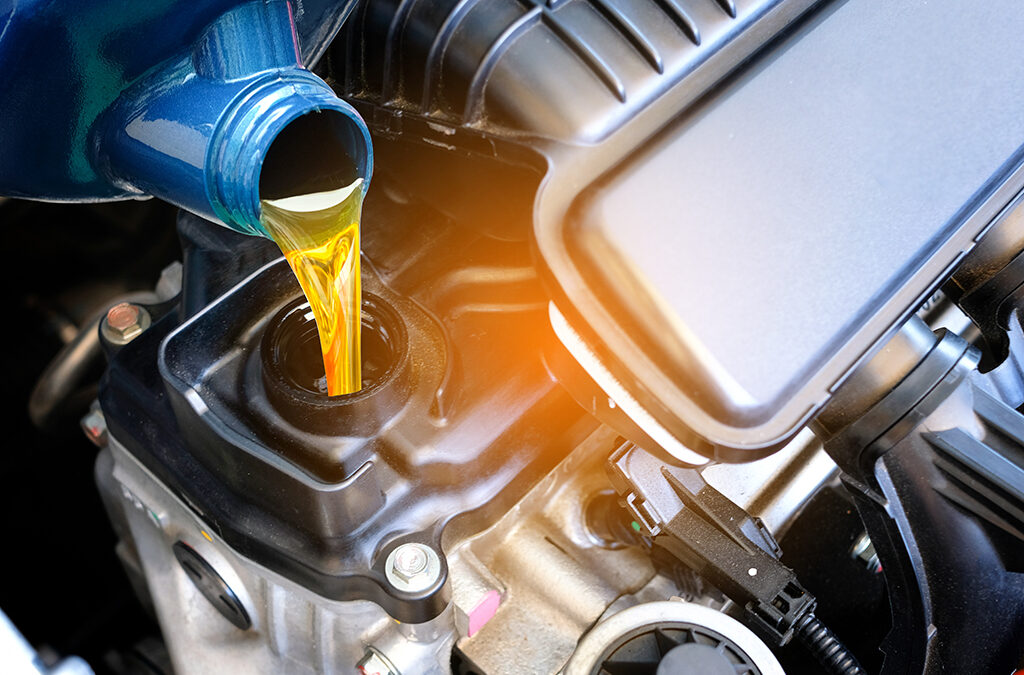 Photo By Seasontime at Shutterstock

Choosing the best type of oil is a task many of us don’t think of when we schedule or show up for our auto repair appointment. In the warm climate around Southlake, TX this is even more important to ensure that you are maximizing your cars engine performance and life. You’ll need to start with getting your viscosity number and type the manufacturer recommends for your vehicle. Starting there will whittle down your options but point you in the right direction for which motor oil is best for your Import.

The viscosity rating is a classification that shows how easily and effectively oil pours at a set laboratory temperature. Lower viscosity oil pours more easily and is considered “thinner” which reduces friction in the engine making it easier to start a car in colder temperatures. Heavier or “thick” oils do a better job at maintaining coating strength at higher temperatures or intense loads, like high constant revving. Synthetic oil is oil that usually has added lubricants to reduce friction compared to conventional motor oils.

There is a set code used by the Society of Automotive Engineers, the SAE, to determine what that code actually means. For example in 0W-30 oil the zero marks the flow at zero degrees Fahrenheit, hence the “W” as that stands for winter conditions and how thick it will get. The “30” is the rate of flow at 100 degrees Celsius and shows how thin the oil will get. When you go in for your auto repair appointment ensure the people selecting oil pick the correct viscosity rating to keep your European Import car humming.

Now let’s select some of the best oils on the market today. We’ll start with Mobil 1 Motor Oil, a popular oil brand with racing aficionados and with the credentials to back it up. Not only is this the official motor oil of NASCAR and Aston Martin-Red Bull Racing, it’s a brand under constant scrutiny by its users and the industry. It also features lines available for purchase for specialized needs like racing vehicles and extended life. Many consider this oil to be the standard bearer in the industry and auto repair for good reason.

Next is the Valvoline Motor Oil brand, a brand that actually can be credited as being the first motor oil. Their big claim to fame is that when using their high mileage oils they will actually guarantee your engine won’t fail as long as you follow their service guidelines you set up for your car before 125,000 miles. That’s a great service to have and could help reduce the number of auto repair appointments you have to call for, meaning your Import may stay on the road longer.

Another well known company that makes high quality motor oil is Pennzoil, originally out of Pennsylvania. The people at Pennzoil say their oil is the best at cleaning build-up and sludge out of your engine which can improve power and fuel efficiency. They also have a line of oil that is made using natural gas instead of crude oil! If you have a BMW your auto repair appointments may already include a recommendation for Pennzoil because of their partnership. They have even put their high-performance line to the test on the vaunted Nürburgring track in Germany.

If you’re looking to support a company that is still family owned based in America Amsoil is a great option. Not only do they sponsor a bunch of events across the country and Canada they actually have a focus on motorcycle oils. Now we aren’t saying put motorcycle oil in your Import because that would be a bad idea, but their automotive oils can claim to be the first synthetic brand on the market. That lengthy history means that when you go in for your auto repair appointment they know how to handle it.

If you have a European Import you probably have a little bit more knowledge of the European Automotive world. You can’t ignore that Total brand is a more well known brand across the pond but sometimes it is difficult to get in the US. They have supported Citroën’s racing teams since the 90s but if you’re a fan of a Euro-centric point of view maybe get the oil for your car that is known best in Europe.

Another Pennsylvania founded company Quaker State Motor Oil is the next on our list. Another brand focusing on reducing auto repair appointments and increasing lifetime of your engine they have many options to choose from. Their testament for that is based on actual people sending in testimonials and writing reviews of their cars over 300,000 miles! Pennsylvania may be a ways away from Southlake, TX but they sure do know their oil.

Another brand that is popular with European racers is the Castrol brand. They sponsor the likes of NHRA drag racing, German Touring, and The World Rally Championship. Having your auto repair appointment use a brand that allows you to ahead of time select which type of their oil is best for your specific car and driving condition is a big plus as well. Less time sitting around listening to options and more time on the road.

Our last brand to mention is Shell’s line of Motor Oil. While this brand may focus on heavy duty usage do not underestimate Shell. They do some great work making sure that residue is cut in the engine and has some of the best heat resistance available in independent testing. Their synthetic line’s unique dispersant additive has been tested to reduce damage and keep contaminants away.

Keeping your Import on the road is something you strive for. Maximizing your time and reducing the number of auto repair appointments is also something we all strive to do. If you live in Southlake, TX the experts of the Import Car Center of Grapevine will look over your European Import model and ensure the right job is done at the right price. Specializing in Import’s is how they can ensure that you get the job done and you don’t have to have multiple auto repair appointments. Visit their website Import Car Center to schedule a service today.